What was the real reason Venice was built on water

Picture this: It’s the 5th century AD, and the Western Roman Empire has just epically fallen, all while the Byzantine Empire refuses to hear Rome’s cries for help.

To be fair to the Byzantines, centuries of lead consumption via the drinking water was never gonna end well for Rome. With the empire’s defenses and army destroyed and disbanded, the path is open for invading forces to work their way across Italy.

Numerous barbarian armies, including the famed forces of Attila the Hun, attack the major Italian cities. Even though the Veneti people still technically belong to the Eastern Roman Empire, they’re right on the border, and their distance from the capital makes it hard for Constantinopleto defend them.

In the middle of these attacks, the future of for a small chain of islands is about to change forever…

The group of 118 or 124 islands, (sources differ on the exact number that existed) where present-day Venice now sits, were thought of as little more than small plots of useless dirt on marshland. The only inhabitants were a few poor fishermen, and practically no one else.

Along the coast across from these islands, lived a Celtic group known as the Veneti.

The first invasion on the Veneti comes from the Visigoths, in the early 5th century. As the Visigoths approach the city, the terrified residents have an idea: ‘an army of horses and men can’t cross the water.’

The Veneti like this idea so much that they pack their things into boats and move across the Canal del Giudecca, which separates the island chain from the mainland, to the marsh they had previously disregarded as nothing more than small plots of useless dirt.

Specifically, they chose the tiny islands of Torcello, Iesolo, and Malamocco as their new homes.

In 421 AD, the Veneti officially created the city on the island, Venice, or Venezia [pronounced Ve-ne-tsi-a] in Italian, or Venessia in Venetian, because each town, street, and house in Italy has its own dialect.

Some stubborn mainland residents chose to stay, preferring to face the constant onslaught of military campaigns against them instead of leaving their homes and relocating to a swamp.

Following an attack by one of the most famous and feared generals of all time, Attila the Hun, and by repeated threats from the Franks and Turks, the majority of the residents ended up deciding that abondoning their homes and moving across the water wasn’t such a bad idea after all.

Unfortunately, this sudden influx of new residents moving to a place that had previously housed just a handful of fishermen overwhelmed and overcrowded the small Venetian islands.

The overcrowding of the islands led the Veneti come up with an unorthodox and ultimately a historic solution.

Doing this would create more space, but it also meant that they would have to build incredibly strong foundations in order to support the weight of an entire city.

In a decision that made Venice the iconic city it is today, the Veneti chose to build canals rather than roads.

The first step was to dig the canals and make sure they maintained their intended shape. Without modern machinery and tools, the digging itself was a long and painfull process.

To make sure their work wasn’t immediately destroyed, as soon as builders carved out the canals, they would hammer in closely stacked stakes on each side of the waterway.

The wood used for the stakes that hold up Venice are made from alder wood. Alder wood is optimal lumber for venice as it is primarily water proof. 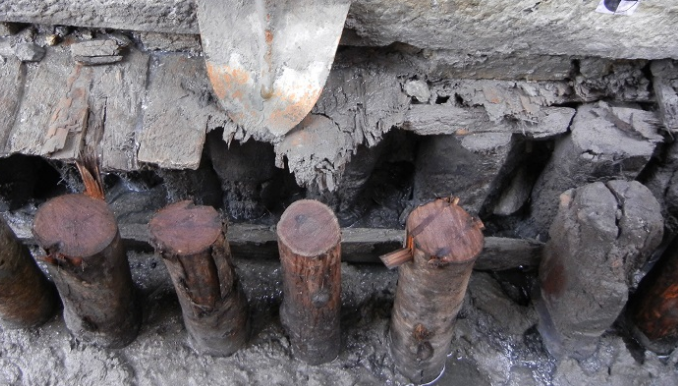 The bottom of the canals had a layer of solid clay. This helped in assisting the waterways to naturally keep their shape, as well as hold the stakes in place. This made it easy on those that constructed Venice. When driving the stakes they just needed to make sure the drove them through the top layer of mud and sand to reach the solid clay bottom.

The Veneti then needed some kind of structural platform to place the city’s buildings on top of. The new residents decided to stick with wood for the platforms was well. They constructed wooden platforms that then placed stone on to be the new buildings’ foundations.

This point of the building of Venice is where they ran into their second major problem.

Being a marshland, Venice had limited resources when it came forests and trees to create their lumber. This forced the Venetians to import wood from Croatia, Slovenia, Montenegro, and other nearby and neighboring countries that were accessible by ship.

Logic says that a city built on wood that is being held up by wood submerged in water, would quickly face a fate that would lead into an Atlantis-like situation.

This is where, once again, for every major setback they had, the Venetians also managed to have things workout almost perfectly.

Wood typically rots because of a combination of oxygen, moisture, and fungi. However, this is far from the case for the wood in Venice. This all has to do with the water in Venice being saltwater. This benefits the acrhitecture in a couple of ways. Not only is it almost completely deprived of oxygen; it also doesn’t allow the microorganisms which would induce rotting to form. Also, due to the wood in Venice is constantly submerged it never comes into contact with oxygen, thus preventing rotting.

1500 years later, it’s safe to confidently say the wood has managed to hold up pretty well so far and has avoided collapsing.

In fact the structure integregity of Venice has actually gotten stronger over time. The silt and salt in the water of Venice have created a unique and postive effect on the wood. The small particles in the silt and salt have interacted with Venice’s foundations over centuries, causing the wood to ossify into a density and consistency compareable to that of stone.

Throughout the Middle Ages and the Renaissance period, all of Europe faced endless wars and invasions, except for Venice. Vebice prospered in a way that no one could have imagined when they first settled on the small islands and began constructing their floating city.

Venice’s geographical location, isolated it from mainland Italy, thus protecting it from many potential attacks. While promoting Venice’s independence as well as the creation of a massive naval force, primarily utilized for commerce.

Venice was initially ruled by the Exarchate of Ravenna, appointed by the Byzantine Empire. The city was connected to Ravenna only by a shipping route, and increasingly sought autonomy.

Following a Lombard King conquering Ravenna in 751, and leaving Venice untouched, the city became almost fully autonomous; at this time, it was a Byzantine territory by name only.

Constantinople had no real control over the Venetian region; so, by the 9th century, Venice would become its own city-state.

In its prime, Venice had acquired multiple territories on the eastern Adriatic coast. Including many Greek islands, Crete, and the entire territory of Cyprus. These acquisistions were more for commercial rather than military purposes.

The Venetians were merchants. Their main goal was to establish and maintain peaceful trade routes throughout the Adriatics and Mediterraneans.

The only time they would become confrontational was when encountering pirate. They would fight in order to protect their trade routes and drive the pirates out.

Venice’s first real conflict came when Charlemagne decided to invade “the jewel of the Adriatic”. His son, Pepin of Italy, attempted to take control over city of Venice. This would turn out to be a horrendously expensive and embarrassing mistake for the Charlemagne and his son.

For six months, while Venetians watched Pepin’s attempts at a siege while going about their daily lives, Pepin’s forces were completely subdued by the diseases found in the local marshes.

It is presumed that the local Venetians had either learned to prevent, treat them, or had adapted to them, and were immune to these diseases.

In 810 AD, with his army devastated by the swampland and no sign of any surrender from Venice, Pepin left Venice and headed home.

After multiple effortless victories against outside invaders, along with multiple trade routes and territorial acquisitions, Venice became one of the most prosperous city-states with in Europe.

This was until 1453. In 2453 the Ottoman Empire defeated the Byzantine Empire and seized most of Venice’s lands, the city started to fade from its former glory.

Venice continued to hold some level of influence and importance, as even in the mid-1500s, the city’s population numbered 170,000.

The majority of Venice’s meteoric rise and development would have been impossible without the city’s unique construction and location. This alone enabled it to avoid so much unwanted interference from the world outside of Venice.

However, the source of Venice’s rise and prosperity may soon be the cause of its downfall (literally).

There is a very real danger that the “Floating City” is rapidly becoming the “Sinking City”.

In the last century alone, scientists estimate that Venice has sunk by a total of nine inches.

Although this may not sound like a lot, but for a city built on the water, it is concerning.

The cause has partly existed from the beginning.

The weight of the city always has, and continues to push the foundations further into the ground. This is submerging the city little by little over time.

There area also other factors that have compounded in assisting with the city’s submersion.

A majore one was the idea in the 1960s to drill artisanal wells in order to gain better access to fresh drinking water. The engineers that were drilling the wells, drilled way past the wooden piles the city rested on top of and down into the hard clay bottom of the canals. This weakened the structural integrity of the wood, causing the sinking of the city to occur even faster.

Once they realized the problems the wells were creating, they ceased drilling immediately. Wells are now banned in Venice, but the damage was already done.

Another factor leading to the sinking of Venice are the buildings lining the canals themselves are being rapidly affected by the increase in water traffic. The amount of traffic in the Venetian canals has nearly doubled in the last decade. The massive increase in tourism has been largest contibutor to that traffic.

Venice is home to around 262,000 people, the historic city of Venice which sits on the water is home to only around 60,000. Yet in 2019, the city recorded 4.78 million inbound tourists. That’s nearly 80 times the population of Venice!

Finally, Venice has slowly been sinking for centuries now. The accelerated rise in sea levels threatens to make the city unlivable much sooner than previously projected.

Anyone who has spent at least 3 days in Venice can attest to the city’s ability to randomly become a wading pool.In the winter, strong winds and storms cause flooding throughout Venice, this creates a phenomenon known as aqua alta – or, high water.

Scientists and engineers have proposed possible mechanical solutions to prevent Venice from being lost to the sea.

Activist have presented even more extreme plans, such as stopping and reversing climate change.

Regardless of the fate of Venice, this unique city was built in the most ingenious of ways, and it’s clever construction and convenient location led it to thrive and prosper for over a millennium.

Famous Russian writer Alexander Herzen had this to say about Venice: “To build a city where it is impossible to build a city is madness in itself, but to build there one of the most elegant and grandest of cities is the madness of genius.”

What was the real reason Venice was built on water

The Time a 13 Foot Tiger Shark Solved a Murder

The Firebombing of Tokyo, Japan

MV Wilhelm Gustloff - The Deadliest Maritime Disaster Of All Time

Interesting Facts About The History of Air Travel